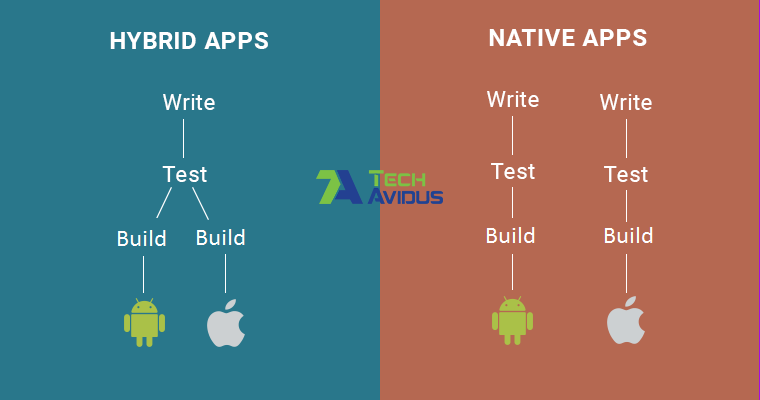 Native VS Hybrid Mobile App Development: Which is better?

Mobile application development consists of a series of processes to consider to create and deploy the app. Most of the mobile application development companies find it a tough choice to choose between Native vs. hybrid mobile app development. There are various option to consider for a judicious choice including- speed, features, objective, and budget. Let us know more about the difference between a native app and a hybrid app.

What are Hybrid apps?

A hybrid app is created as a single app for use on many platforms. Hybrid apps are an outcome of the combination of web apps and native apps. Hybrid Apps are using HTML, CSS, third-party libraries, and JavaScript. A web-based program is put in a native app shell and connected to the device’s hardware.

What are Native apps?

A native mobile app is targeted only for a single platform like Android, iOS, or Windows. The app targets a specific platform in its native programming language. The developers of native apps need to stick to different guidelines according to the different platforms.

A fair comparison between native and hybrid mobile applications

The hybrid app requires less time, cost, and efforts as with this, you can target multiple platforms with just a tweak in the same code. On the other hand, native apps have to be designed specifically for each platform, which increases the cost as well as the time of development.

Native apps are designed specifically for one platform; thus, they are far more efficient in performance. Right from the screen size to the hardware capabilities, everything is just perfect. The native apps provide faster access to some inbuilt device utilities like camera, GPS, and microphone increasing the level of performance, which is nearly impossible to achieve with hybrid apps.

Hybrid apps have a low maintenance cost. The reason being that these are web apps incorporated in a native shell so its content can be updated multiple times as the need arises. Thus, paving the way for low maintenance.

Now that you are pretty much aware with the Native and hybrid app difference, you can personalize your choice levying the crucial parameters. Though hybrid apps offer a cost-effective and quick go-to-market solution, native apps are better when you want to access the core features for better performance specific to a particular OS. If you are looking for a savvy development team, Contact us now!

We use cookies for Improving your user experience and to analyze our traffic. If you proceed to browse this website, we will understand that you agree with we can place cookies on your device.